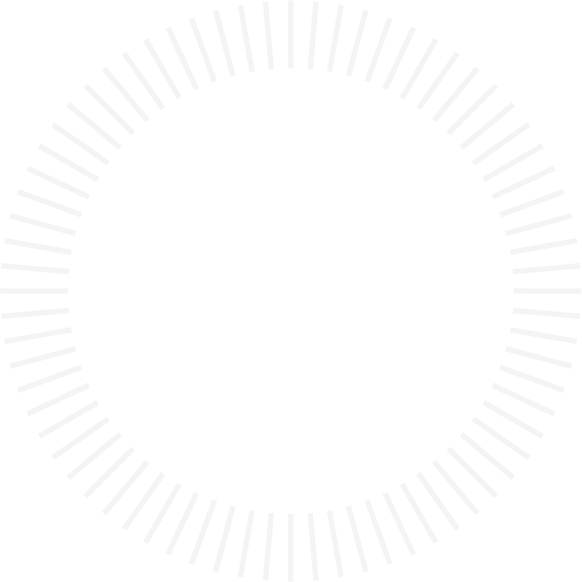 LETTER FROM the Executive Director 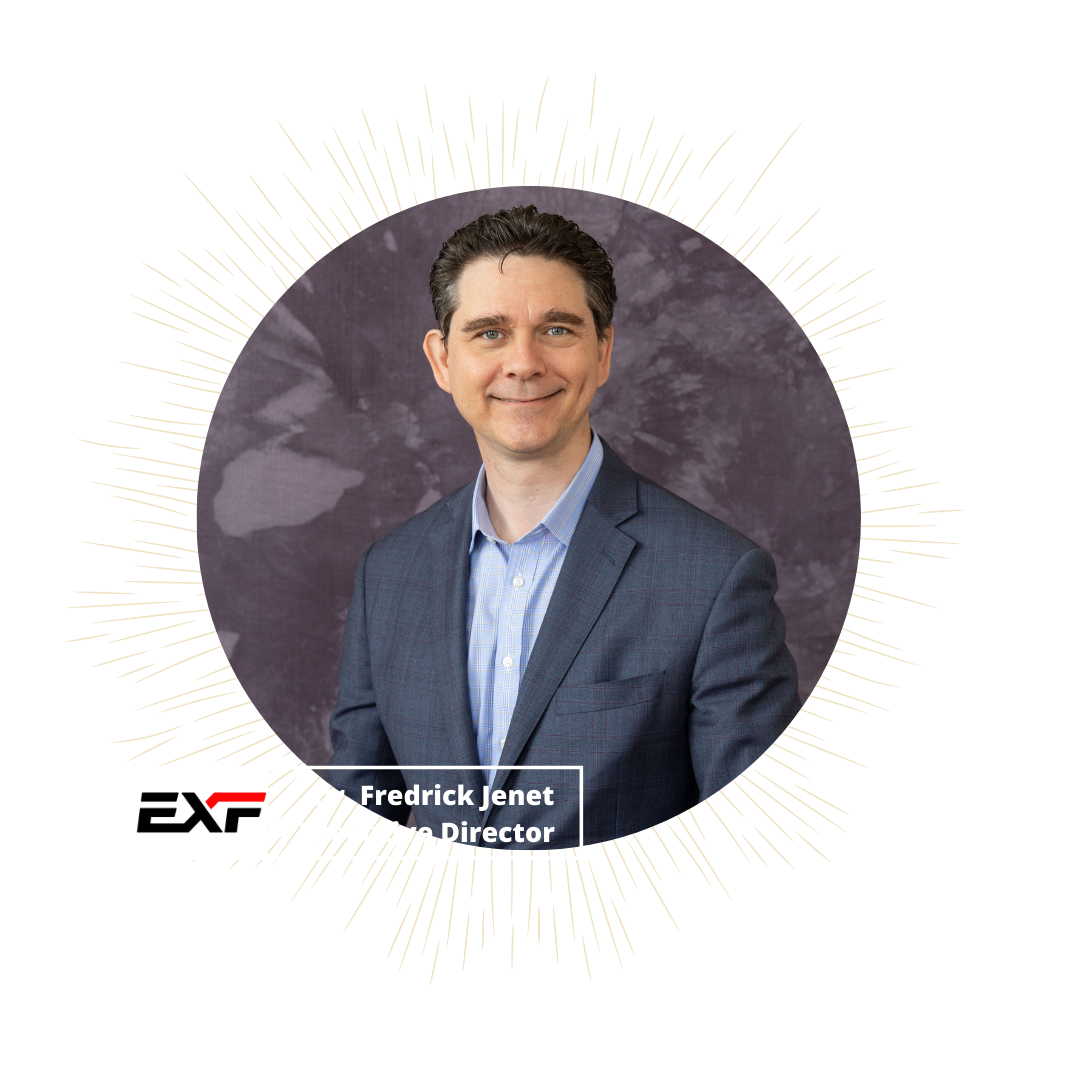 While many industries were forced to slow down this past year, 2021 was a year of accelerated growth in the New Space industry. Dreams of space tourism are now a reality, with not one but multiple private space companies offering tickets for suborbital flights (Virgin Galactic and Blue Origin), for a ride to the International Space Station (SpaceX), and for low-Earth orbit (SpaceX).  As you read this, NASA’s Perseverance Rover is on Mars collecting rocks, photographing Mars’ surface, and off-roading. The success of this uncrewed mission to Mars will provide invaluable information for research on ancient life on the planet and for future missions to the Red Planet. Once a rocket is ignited, there is no stopping what is next, the New Space rocket has certainly been ignited and there is no stopping it.

Similar to how the number of space travelers grew this past year, Expanding Frontiers has also welcomed many new adventurers. Our student programming has grown to include young professionals interested in learning how to launch their own tech venture and international high school students. The Brownsville-RGV economy is acting as a launch pad for multiple NewSpace companies including [insert company name(s) here … Spaced Ventures, Atlas, Space Channel]. Our partners at the National Space Society launched a South Texas chapter, led by one of our own entrepreneurs-in-residence, William Brown. Working with cutting-edge technology from NASA and the Department of Energy, Expanding Frontiers’ Entrepreneur-in-Residence apprentices developed business plans for five innovative products with applications on Earth and space alike.

We, at Expanding Frontiers, are incredibly optimistic for the future of the New Space industry and the impact it can have on our city. From technological to economic development, New Space holds boundless potential. It is our mission to empower the next generation of innovators: engineers, scientists, physicists, artists bridging the gap between space and Earth. Our success would not be possible without our volunteers and local collaborators, …. 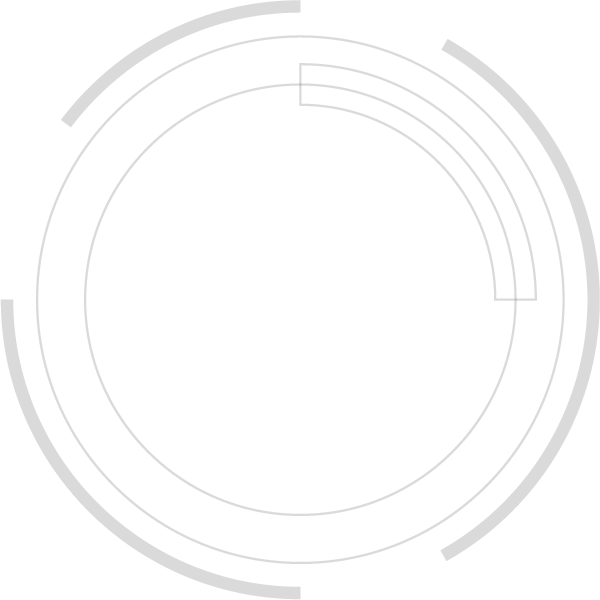 Expanding Frontiers inspires students to view the new space field like a blank canvas, where scientists, business executives, and artists alike have a job to do.

In March, 40 students from the Rio Grande Valley were placed in teams where they created mock aerospace companies set 45 years in the future. Over the course of 48 hours, these students designed their own space settlement. They became CEOs, Vice Presidents of Engineering, operations and marketing team leads. Working with David Cheuvront, who helped design the International Space Station (ISS), Anita Gale, CEO of the National Space Society, and other industry experts these students got a glimpse of their future work environment in the NewSpace industry. 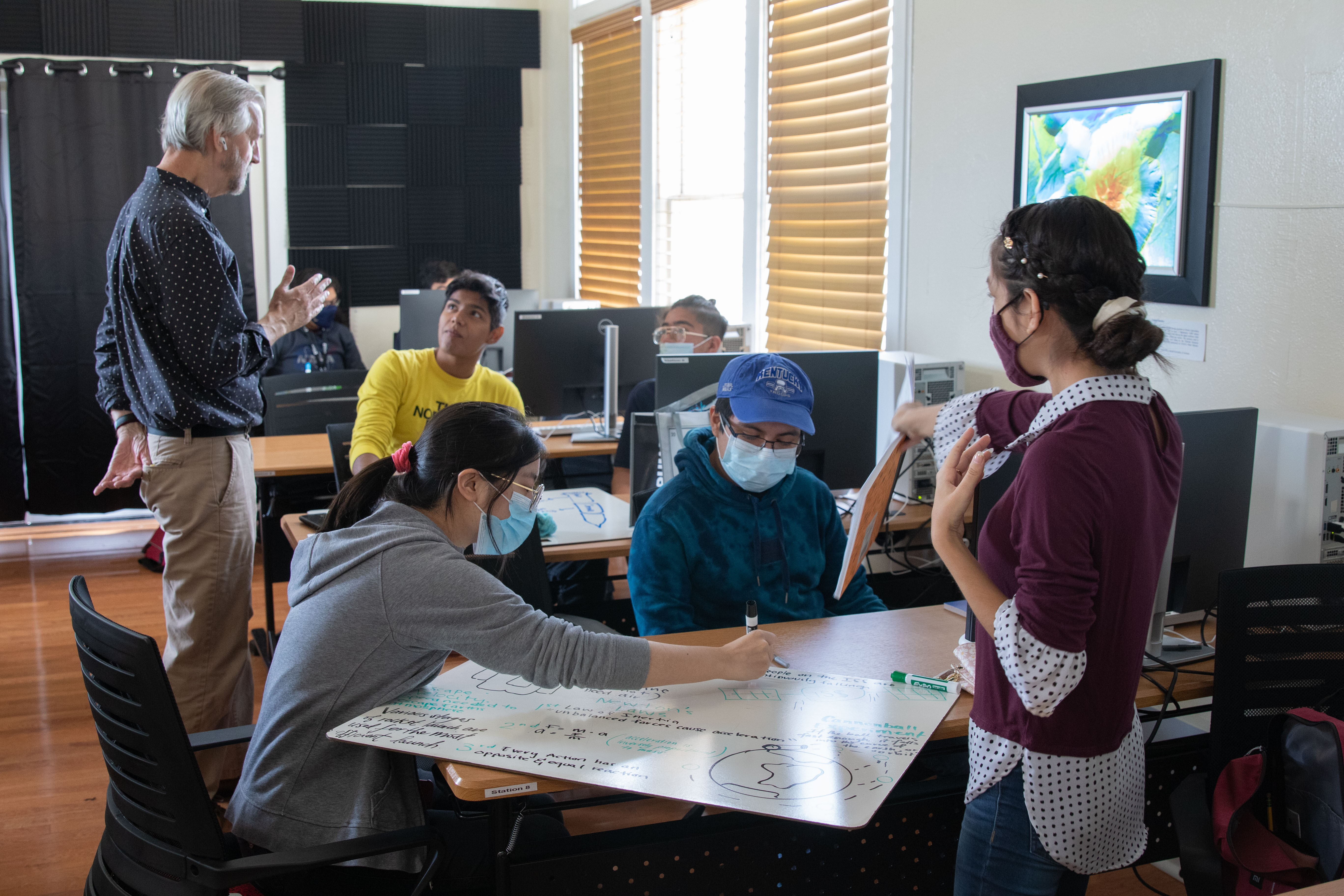 "I heard about [expanding frontiers] through the space settlement design competition and knew i had to attend the summer academy. i've always been interested in the space industry and i knew this was the perfect opportunity to learn more about it"
- Jared Lara, ExF ALumni 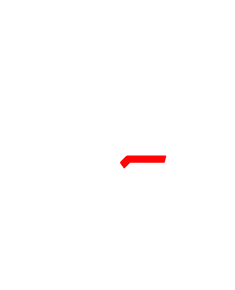 This July, some enterprising students experienced a summer camp like no other: a crash course in astropreneurship. The three-week program, held at Expanding Frontiers, exposed ambitious high school students to a new career pathway: one of a New Space entrepreneur. Guest speakers from NASA, the Silicon Valley Space Center, the Center for Advanced Radio Astronomy, and other industry leaders introduced students to an industry developing in their own backyards. New Space, or  “commercial space,” is a new paradigm where private companies, rather than government agencies, lead the way in democratizing and monetizing space exploration. During the three weeks, students received hands-on training in business planning and public speaking, both of which should come in handy when these academy graduates go on to start their own companies. 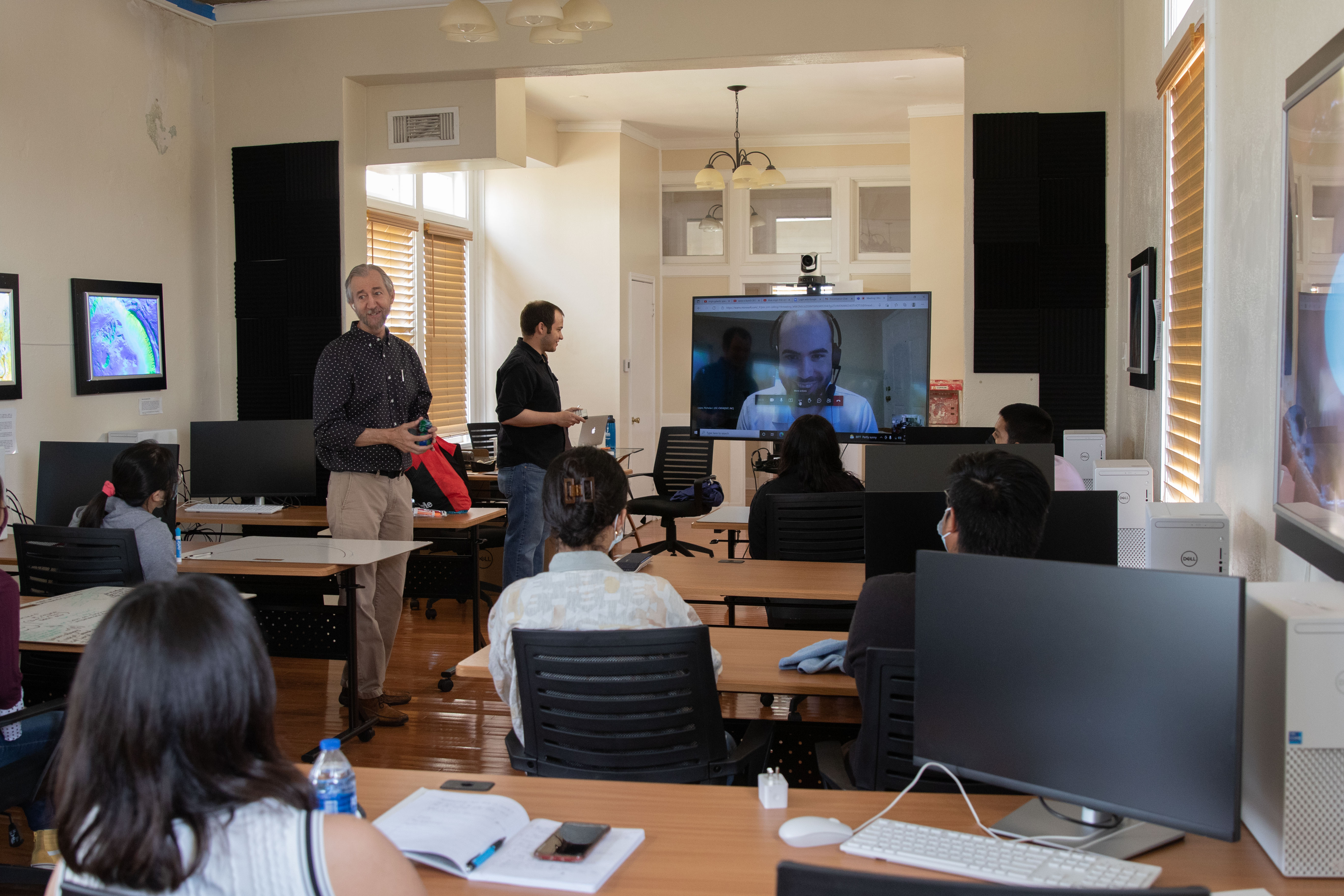 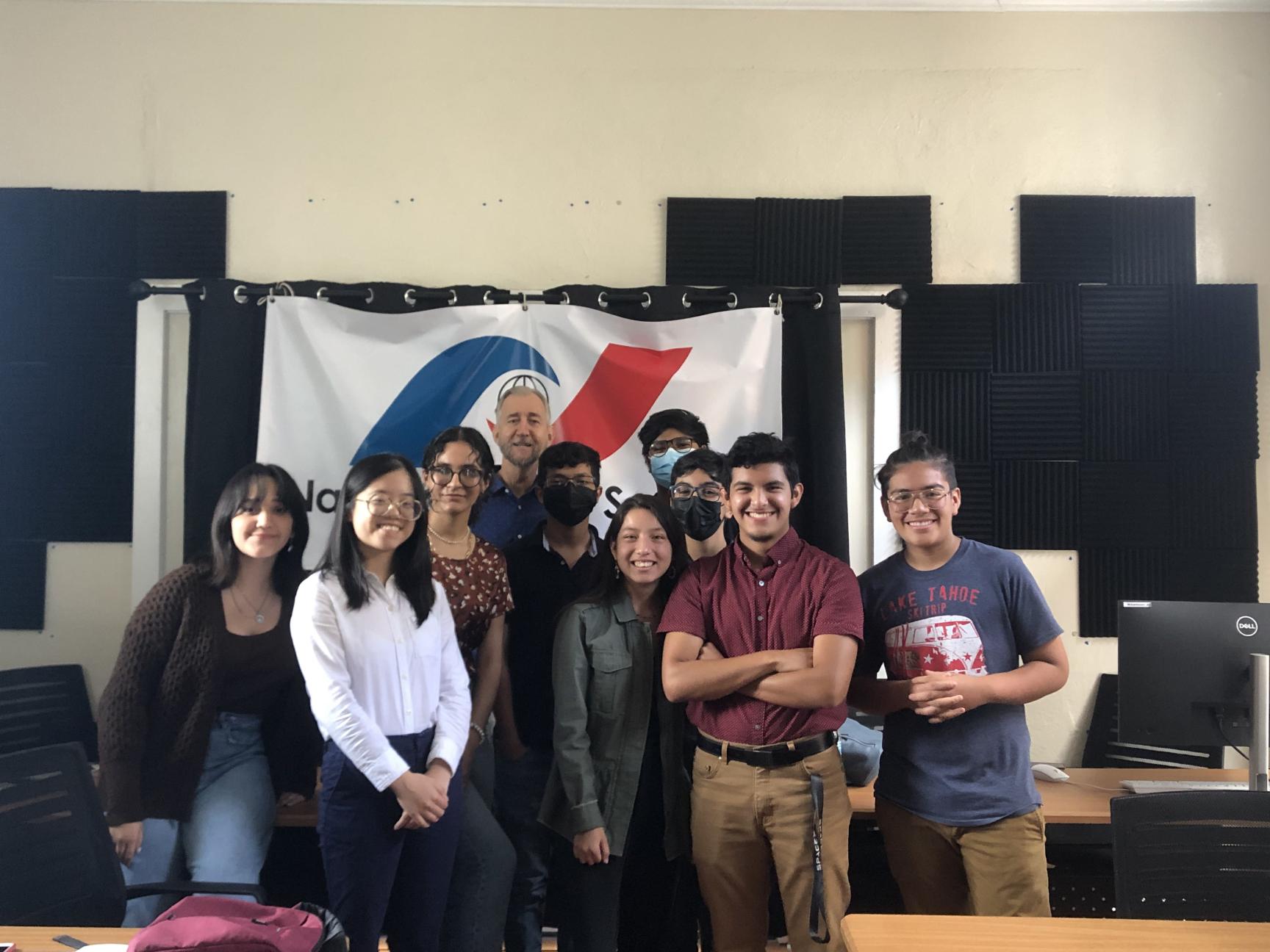 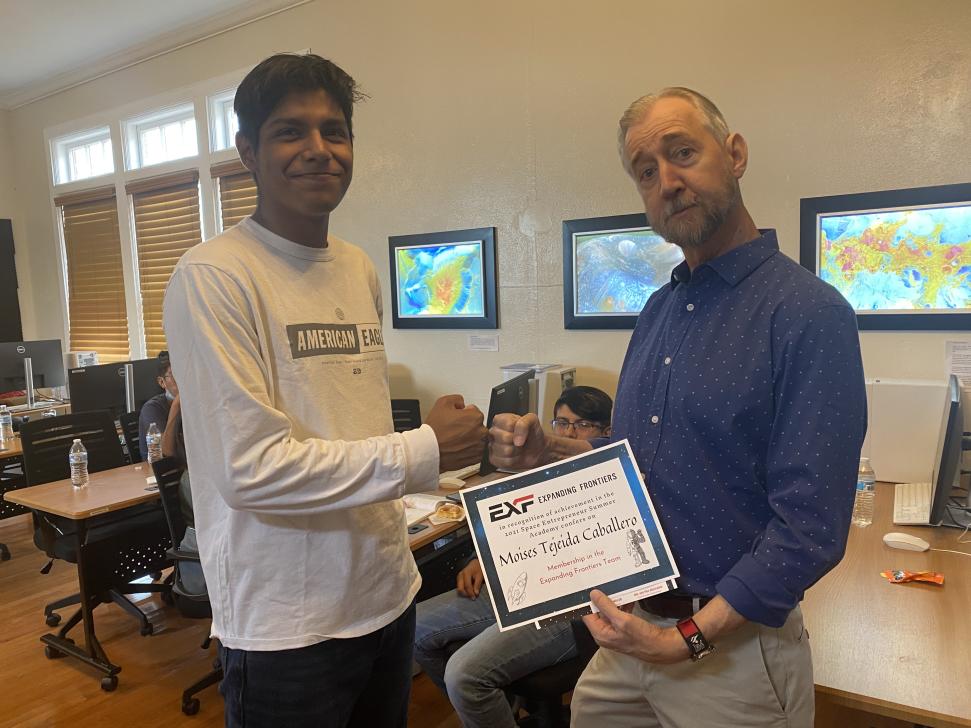 “i could only describe my experience with expanding frontiers as a once in a lifetime opportunity. our future in space needs someone from every field not only science. [it is] awesome to see that as we work with people of different backgrounds and interests.” 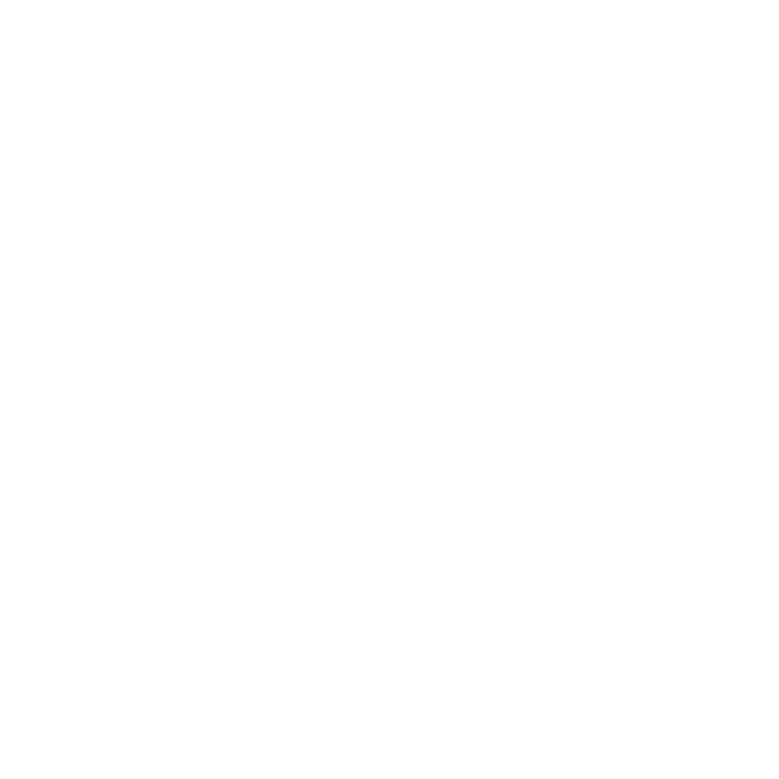 This year Expanding Frontiers successfully launched the Entrepreneur In Residence Apprenticeship Program (EIRA)! The Entrepreneur in Residence Apprenticeship Program aims to attract and prepare the best and brightest students and aspiring entrepreneurs in South Texas to successfully launch startups in the space, energy, and technology industries. Recent high school and college STEM graduates report having too few job opportunities in the area. Yet many of these students have an interest in entrepreneurship, they just don’t have a clear path to begin. ExF’s EIR apprenticeship program was designed to specifically solve this problem. The 2021 EIRA cohort enjoyed learning and producing business plans for commercialization of NASA technologies, we are excited to see what the future holds for these alumni. 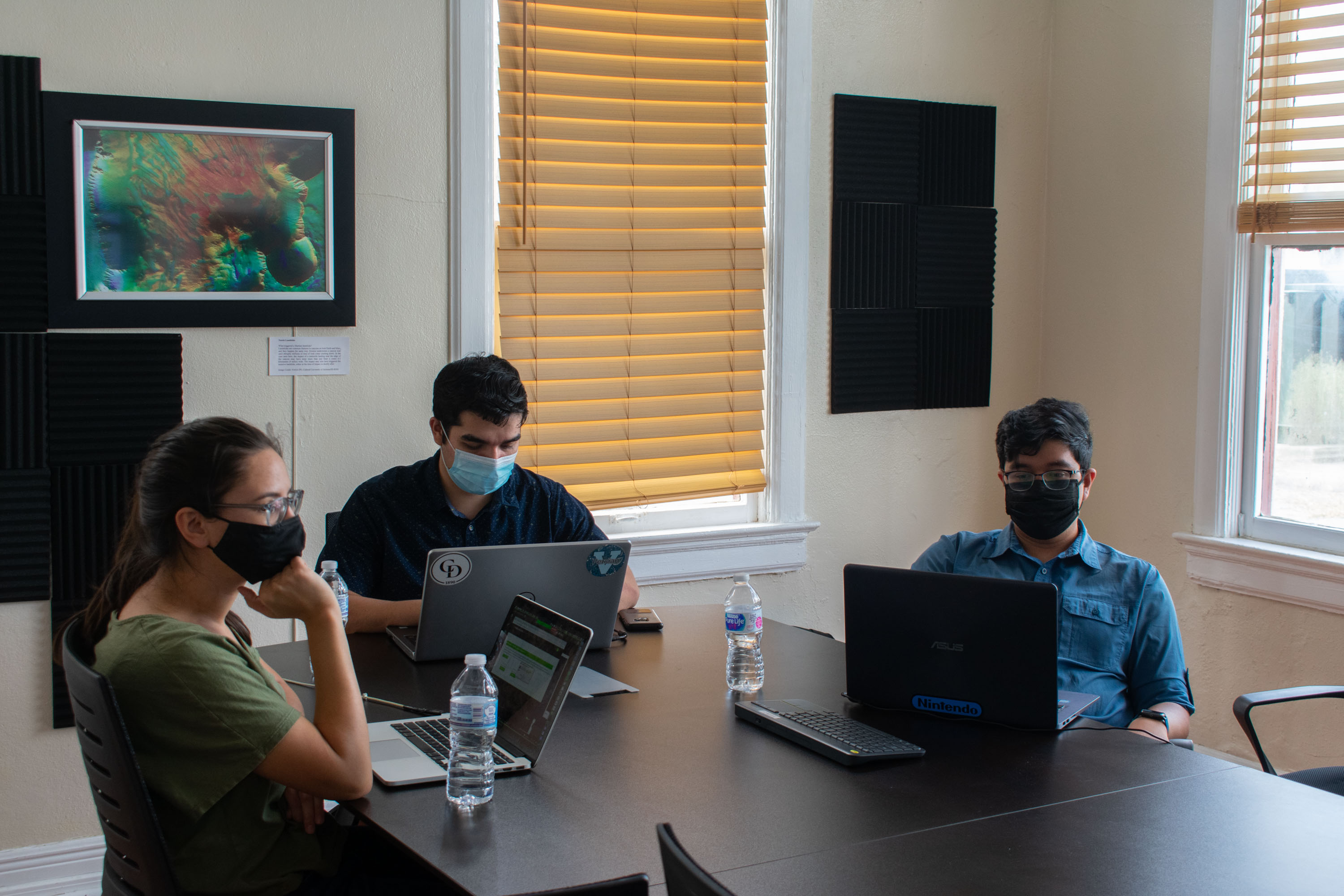 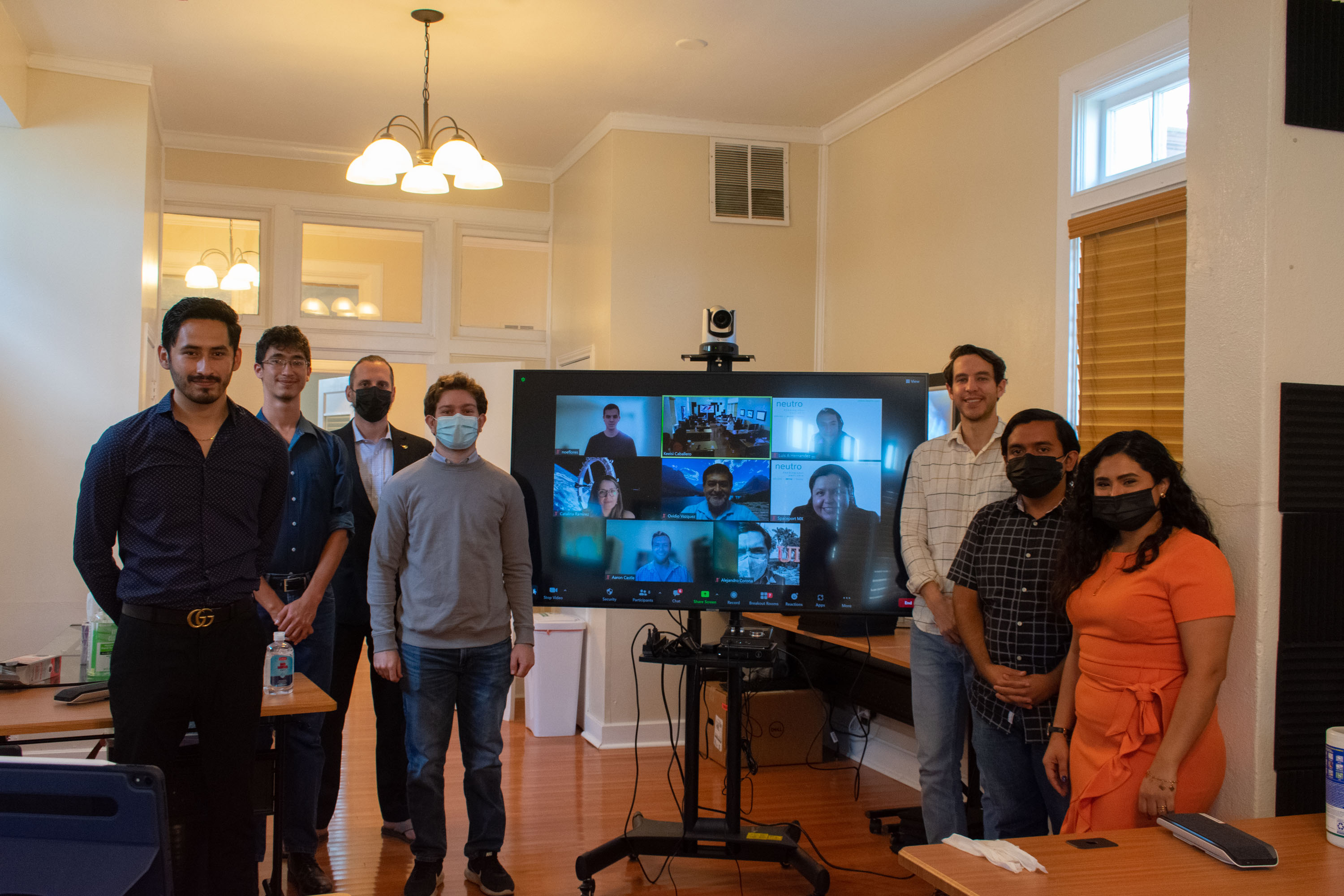 Expanding Frontiers sponsored teams of developers for various data challenges through the Space Coders program. The purpose of Space Coders is to train developers to meet the demands of the NewSpace industry. We recruited data analysis and programming students interested in tackling modern real-world problems in new space and energy.

We brought astropreneurs to South Texas and we grew a few of our own.

Born out of Expanding Frontiers

Permittivity raised over $5000 in seed funding through business pitch competitions since its inception in 2019. Permittivity successfully competed in StartUp Texas, the Rafael Munguia Business Plan Competition, and …

Lunar Station Corporation
Recruited
Lunar Station provides cutting-edge Lunar Environmental Intelligence for organizations planning and executing missions on the Moon. LSC offers a suite of solutions that generate 3D renderings, visualizations, reports, and analyses that provide optimal mission locations, safest navigational routes, immediate cost savings, and improved risk reduction. For lunar missions, having data is not enough. It’s how that data gets used that matters. Refining raw data into actionable intelligence is Lunar Station’s business. The Boston-based Lunar Station is a setting up a Texas outpost in Brownsville through Expanding Frontiers. Each of the above companies won $20K for being selected as winners of the Inaugural StartUp Texas Pitch Summit competition
AquaPura Technologies
Born out of Expanding Frontiers AquaPura Technologies is a new startup based on commercializing NASA water purification technology. There is a trillion-dollar market for wastewater treatment and recovery, everything from battery manufacturing, to electricity generation, to the food and beverage industry, mining, textiles, and—especially in Texas—oil and gas drilling. New legislation and regulations are requiring wastewater industries to reuse their produced water and reduce the use of fresh water. Pura aims to develop mobile wastewater treatment systems that can work on site and are completely self-powered. The company is focused first on the Texas, Florida, California, and New Mexico markets, but has plans to expand internationally. AquaPura is a veteran-led company.

“Expanding Frontiers can become a big organization. If fueled properly, we can be the gateway for new space companies. I envision Expanding Frontiers doing activities to start changing the culture of the valley, retain more homegrown talent, and improve our labor force. We need a larger public presence.”

“I have gained a lot of experience. In college, especially in computer science, you learn how to make software but you don’t learn how to do it in a real-world application and that is something I have been learning a lot at Expanding Frontiers. My favorite part is working with a team of highly motivated people in the growth phase of a company.” 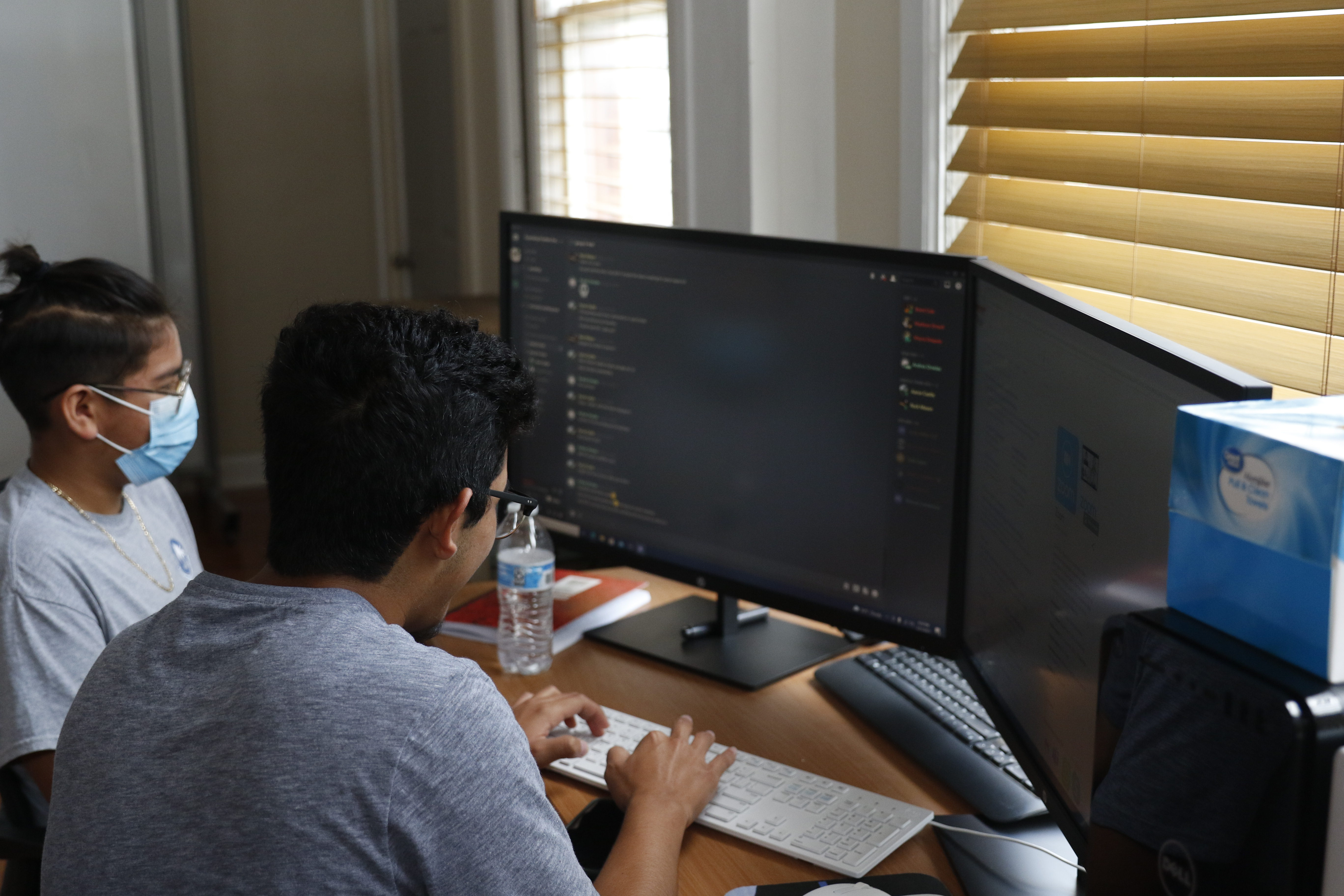 We forged new partnerships to extend
our reach internationally. 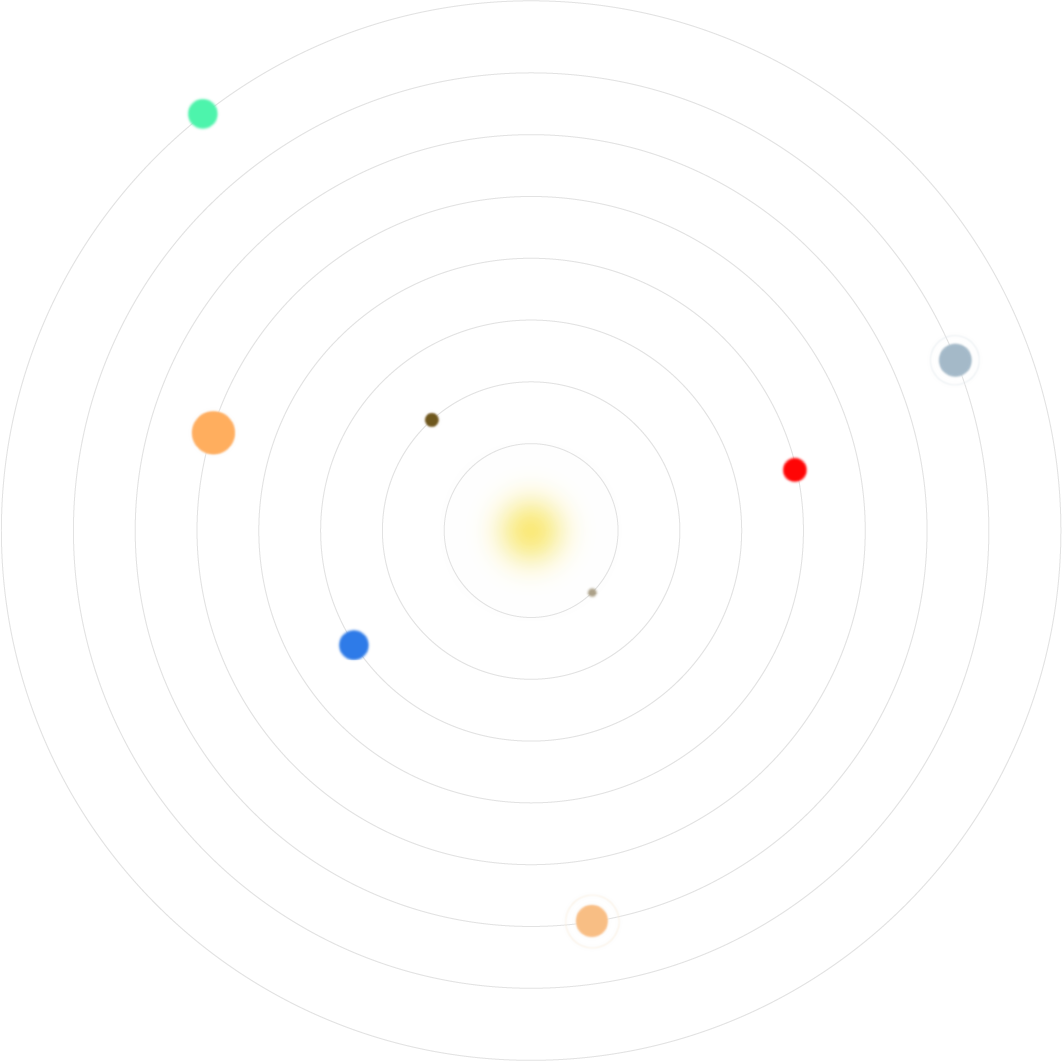 we sought out a major untapped potential for new space – veterans of the United States Military. 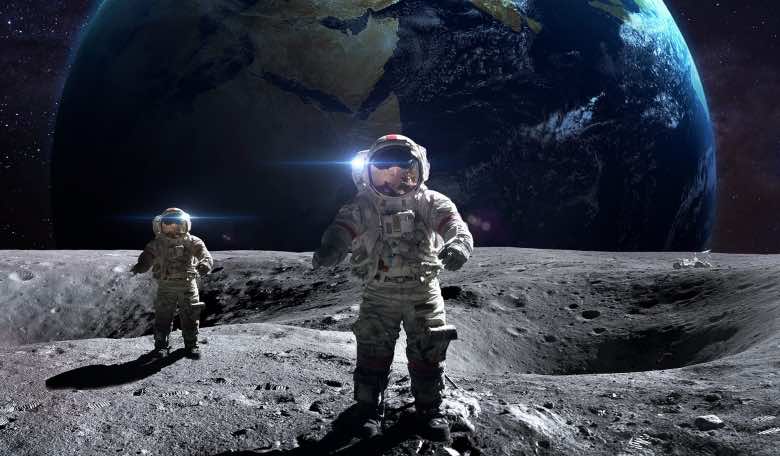 To build a commercial space economy, nothing is more important than talent. One hugely untapped resource for talent is veterans of the U.S. military, especially highly skilled enlisted servicemen and women without college degrees. Founded by Scott Castle, the Veteran Ascension Program aims to find, attract, and support highly trained veterans to careers in the commercial space industry and commercial space startups.

Veterans have many hard and soft skills that make them ideal for careers in new space: they are disciplined, work well in teams, often have highly technical engineering abilities, and are mission-driven. Expanding Frontiers actively matches veterans with companies who need their talents, and then supports veterans as they integrate into civilian life more broadly.

“If people knew that hidden deep down beneath the news there’s a glorious ember burning in Brownsville, Texas, that is ready to burst out, they would be thrilled.”

We started to get the word out

On July 11, 2019, Expanding Frontiers, together with the City of Brownsville, officially launched New Space City Brownsville. That afternoon, Expanding Frontiers hosted the inaugural Commercial Space Tech Forum, a panel discussion at Texas Southmost College. Current and former NASA employees, the director of the New York City Space Alliance, and a co-founder of the Silicon Valley Space Center participated in an animated hour-long panel discussion on what opportunities the commercialization of space presented and how the people of Brownsville might seize them.

The New Space City Brownsville Commercial Space Webinar series convenes experts to discuss the pillars of the new space industry, from rocket companies to 3D printing to satellite and communications industries, and more. The featured speakers range in background from venture capitalists to astropreneurs to retired military leaders. The first hour-long discussion was broadcast by the Brownsville Convention and Visitors Bureau on Facebook Live May 1, 2020. Upcoming episodes, planned to roll out quarterly, will explore many themes in commercial space, including discussions on transitioning from old space to new space, technology transfer, women and minorities in new space, and telling the story of commercial space.

Special thanks to our sponsor Visit Brownsville for their support.